Well, as per my personal tradition I was out and about making photographs on the first day of the new year.
According to the forecast we can expect clouds and rain for the rest of the week, so I was glad to get out today while the sun was still able to occasionally peek out between the clouds. Here are some images I made from the photo outing. 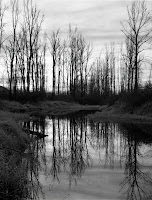 I visited a new favourite spot down by the Fraser River the Abbotsford side of Mission, BC. Matsqui Trail Regional Park. Hiking along the river one notices a set of fire pits usually occupied and the pleasant smell of campfire smoke dissipating into the air.
It was along this trail that I noticed an off-the-trail discovery of a small isolated pond of water surrounded by trees. Because of the natural shelter around the pond, the water was exceptionally calm casting really nice reflections of the trees. 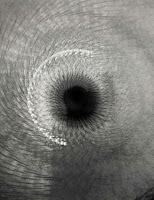 Today, I was working with my Toyo 45 A-II with ILFORD HP5 Plus film which I metred @ ISO 320 with my Sekonic L608 Multi-Master Metre. I had the camera mounted on my SIRUI n-2204X tripod. The lens was a Schneider 150mm f/5.6 with a 58mm yellow filter.
This image was an experiment in the use of my rotating camera back.

The photo to the left was just behind the pond, I made a multiple-exposure, the Westcoast walking trail is a green covered gentle relief that also gave me the idea to capture people walking by from its low vantage point. The foreground was primarily green slope divided from sky and cloud. The thin border between the two was the walking path.
So it was a good day packing my 4x5 and very productive as I exposed 10 sheets of film, but alas, must sign off now and get dinner ready as my wife is patiently waiting ...