Today is Canada's 140th birthday as a nation.
I set out to capture pinhole images made with six sheets of 4x5 colour transparency film.
Now, this is a big step for me - I must have begun to take pinhole imaging seriously to use this type of film.
I mean, it is not a film I often use even with my Toyo 45AII, so with E-6 processing it probably works out to over $5.00 a sheet thus, it is not the type of film one treats with a Laissez-faire attitude.

Nevertheless, it was a decision I made - a committment you might say to the artistic side and perhaps that is what pinhole imaging has been doing, i.e., bringing more of the artistic characteristics out of me.
Anyway, I will look forward to seeing the images when I have an opportunity to get the sheets of film processed.

Camera: Zero 45 with 2 extensions - focal length 75mm, f/216
Film: Velvia 100
Exposure based on sunny 16 and consultation with the Black Cat Exposure Guide
Light streaks and whifs of cloud - beautiful blue sky made for exquisite sky scapes.
Exposures made between ~ 1/2 second and 1 second as best I can recollect without a timed shutter apparatus.

Subject #3: Cranbrook Fire Hall with the same 3 flags as above 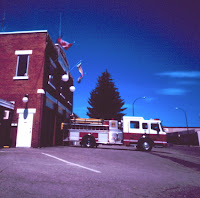 I wanted to capture scenes this day that included the Canadian flag. By the way, the Maple Leaf design on Canada's flag was contributed by J. St-Cyr.