Today was Threshing Day at Heritage Acres near Victoria, BC.
The kids and I drove up the Pat Bay Highway under an overcast sky with some light sputtering rain drops. What kind of outing would this be ... Oh well, we were well on our way and thus, continued on to the event.
As it turned out the light rain subsided and we enjoyed an overcast, cool outing - very nice in my books.
I would say we were there in time to get a good parking spot and after grabbing my pinhole photo gear, we headed straight for the threshing activity.
It was incredible, an old steam engine with a hugh fly wheel connecting an old fashion (circa 1920s) threshing machine via a wide long stretch of belt. Beside the converyor going into the machine were guys pitching in stokes of what appeared to be barley.
Dusty amidst the flurry of activity and occassionally the boiler blew off excess pressure with a high pitched whistle and lots and lots of steam - perfect for photography.
The smells were something too ... raw smells, different smells, similar to those we experienced I suppose in the Blacksmith shoppe.
JC the engineer for the boiler engine that ran the thresher was very kind in blowing steam for me - I really appreciate the kindness of the guys. 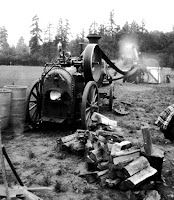 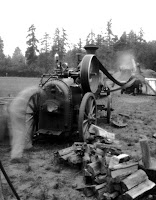 We waited in line for quite a long time to catch a ride on one of the several small scale replica trains that a local model railroad club offered. They just recently expanded their track around the property and it was a beautiful ride with a tresle and some bridges, really nice scenery and I'd say about twice as long as before.
Got the kids a couple of burgers at the Whistlestop station, I got stung by a wasp, ouch!! those things really smart!
The little village-like area was full of displays of old types of engines and tractors and of course there was the museum, which we didn't go into.
Heritage Acres is a unique place where farming machinery from the past comes back into action thanks to the hard work and dedication of its many volunteers who have a passion for this type of work.
Photographically, I was queried quite abit by people inquiring of my camera gear, i.e., Zero Image 4x5 and 6x9 camera. Nevertheless, I was able to secure some images.
I've already processed some of the film and the results look good.
My film of choice in 4x5 was Super-XX & TMX 100; in 120 I used TMX 400 film.
The 4x5 was set at 75mm f/216, whilst the 6x9 was set at 645 & 6x9 f/235 for one roll.
K. operated the Holga, whilst M. operated the digital camera.
I was pleasantly surprised to see Jim & Hanna as well, two very good photographers in their own right with their DSLRs.
We were outta there by about 2pm, I was a great way to spend some time with my wonderful children.