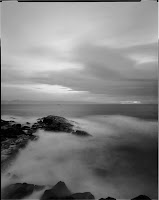 Ja108 what does it stand for?
It seems like not such a long time ago there was a lot of commotion about a little thing called Y2K, well it has nothing to do with that.
It simply stands for January 1, 2008.
Anyway, made my first images of the year yesterday with my ZeroImage pinhole cameras, i.e, 4x5 and the 6x9 set at the 645 setting.
I first exposed 5 sheets of 4x5 film, Efke IR unfiltered and then I exposed almost a complete roll of 120 HP5+ Ilford film in the 6x9 camera. The f/stops were 216 and 235 respectively.
And as I recollect exposures ranged from 30 seconds to 60 seconds with the longer times being the keepers.
I went down to the end of land not too far from my home in Victoria to a place called Esquimalt.
There I went to Flemings Beach - Macaulay Point with the Strait of Juan de Fuca separating my home and native land from the United States. If the cloud cover isn't too bad, one can see the Olympic Mountain range in Washington state.
Anyway, it was overcast save for some colour where the sun would be, so I couldn't catch the first sun rising. Nevertheless I was able to make some images and enjoy the spectacular waves crashing against the rocks, it was particularly windy so the wave action was good.