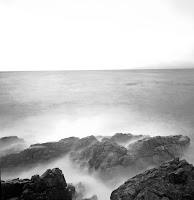 Ahharrrr matey
Shiver me timbers - cold and windy down by the waters today.
First went out to MacCaulay Pt., however was thwarted by the waters that flooded over a portion of the walkway. Okay, not too worry, just drove down a bit of a ways to Saxe Point, where I made today's pinhole images with my two ZeroImage cameras - a 69 deluxe and the 45.
Went out with the pinhole cameras with a vision of capturing crashing waves upon the rocky shore line with the Strait of Juan de Fuca and the American Olympic Mountain Range in the distant background.
First made the last two exposures on a roll of 120 that I had started on the 1st, so I still have my 120 first of the year images to process, and of course these two on the end from today.
My metre was reading 1 second at f/128, which I extrapolate to about 5 seconds for a camera apertures of f/216 or f/235.
However, I felt that such short exposures would not give me the effect of water crashing upon rock to a significant degree, so I made exposures in the 20 ~ 60 second range with the majority between 20 & 30 as I recollect. Hard to put all this into words, hope to share some images shortly. I exposed 8 sheets of 4x5 film and the 6 sheets I processed this afternoon are hanging to dry right now.
As expected the sky is hot, yet contains some detail with the water-rock part of some of the images showing promise.