Today I wanted to develop the 120 film I shot yesterday from my 120 Pinhole Blender at Gov't House as yesterday was World Pinhole Photography day.
Well, I was out of my good ol' HC-110, so off I went to a local camera store to (a) buy some film developer and (b) drop off my spent fixer.
As it turned out there was not a bottle left and I recall a few days earlier when there must have been at least 10 bottles.
I had been eyeing the Ilford Ilfotec-HC, but boy was it quite a bit more than the HC-110. Anyway, I had no choice, so I purchased the Ilfotec and this afternoon, processed a couple of rolls of 120.
One thing I like about this film developer is the ratio of 1:47 for one-shot processing.
Even though it initially is expensive, one can make a bottle go a long way, which is good.
Technical Data
Ilford Pan F film ISO 50 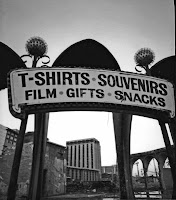 The roll I shot through the ZeroImage 6x9 set @ 645 came out amazingly sharp and beautiful - surprised I was since this is a pinhole camera not a lens camera.
The other roll of 120 Pan F was from the 120 PH Blender - fogged :( I still am having trouble with the final take-up once the roll has been exposed. I have everything set right at the beginning and wonder what it could be.
Thus, the only images I have from the WPPD are from my ZeroImage 4x5 from yesterday's posting.
Here is an image from the roll of a business being demolished near a motel I once stayed at.
This is one from the roll that did turn out...what do you think? Hard to believe it is from a pinhole camera?