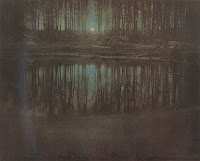 The Pond—Moonlight is a pictorialist photograph by Edward Steichen. The photograph was made in 1904 in Mamaroneck, New York, and features a forest across a pond, with part of the moon appearing over the horizon in a gap in the trees. The Pond—Moonlight is an early color photograph, created through the use of light-sensitive gums. Only three copies are known to exist. In February 2006, a print of the photograph sold for US $2.9 million,[1] at the time, the highest price ever paid for a photograph at auction.