A Day in Beijing

Today, I made my first solo trip into Beijing.
Purchased a ticket for the Bullet Train yesterday with the help of a kind hotel staff member and my passport of course.
Took about 60 minutes to get to the South Beijing Railway Station from the Tanggu station nearest my place.  From there I lined up to purchase a subway pass.  Then took Line 2 four stops and transferred to Line 1 and headed to Wukesong Stn. From the station, it is about a 20 minute walk to the camera market, but being my first time, I ended up taking a taxi.
Despite all the hype I had read about this place, it was not up to expectations.  It is just a bunch of light bird cage shops hacking new and used equipment, but the used stuff is definitely not worth the prices they are asking.  As a matter of fact, I was quite disappointed in some respects - NO DEALS!  This place as so many I have come across here in China has been economically ruined by hard-core business people who would make any red-blooded capitalist grin like a Cheshire cat.
I did find film, processing gear, silver-gelatine fibre paper and chemistry, so it wasn't all a waste.
I ended up buying a compact digital Fujifilm XF1 camera and it is okay.  It will be for record and grab shots.
I did find the camera I've been wanting for awhile and with the exact lenses I want as well.  The price for this used system however was way outta line, so I looked, briefly handled, tried to reason with the guy, but he didn't budge!  Left it on the shelf and when I got home, just got one from Japan via ebay, but with only one of the lenses I want for the set.
Well, because of all the stuff I got for film photography, and the fact that I did notwant to spend the rest of the day walking around carrying all that heavy stuff, so I took a taxi back to the train station, but boy what a distance!  It  cost me about 50 Yuan whereas the subway with transfers was only 2!
Anyway, it is easily a day trip, just leave early in the morning and you can be back before dinner time depending upon what you do. 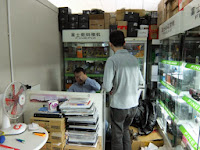 Overall, not bad for my first experience, I am hoping now to see some galleries and find a good darkroom to work in for future trips.
Here are some sample shots with my XF1.

The shop where I  got the camera, the cool looking train station and a couple of out and about in Beijing.