Yesterday (2013-10-19) I had the privilege of being invited to join a group of Chinese teachers for a day trip to the Fragrant Hills Park in Beijing China.
From here in TEDA it was about a three trip one way.
We met at the school (Maple Leaf) and were on the road around 6:40 am.

It was a very nice day.  When there, we were greeted by loads of street vendors plying their trade along much of the route, but especially up to the entrance of the park.  On the way back I purchased a map and two sets of cards made out of pressed butterflies and leafs; just a little souvenir of the visit.  I also made several pictures on a borrowed Sony Cyber-Shot, not my ideal camera, but the best I could do under the current circumstances. 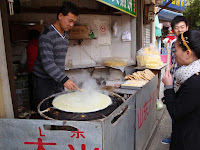 By the way, the trip was sponsored by the Shanghai Pudong Development Bank out of Tianjin.
They gave us a light lunch, transportation in a bus, park entrance and a huge dinner spread when we got back in Tanggu area. 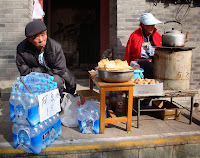 Anyway, the park was very nice although the vegetation had only began to hint at changing colours.  The hack up the mountain was gruelling and crowded all the way up and down with throngs of people.  Because of all the people it took about two hours to reach the top and boy was it a hack ... I don't think I want to do that again.  After reaching the top, wall-to-wall people eating and taking pictures in front of a rock with Chinese script upon it and guys holding up flags into the wind that was whipping across the top.  Boy what a view of Beijing and the Forbidden City below.
I was lucky enough to find a place to sit and eat lunch before making my way all the way back down.
Going down was much easier and the path split off several times meaning that the way I chose was not as crowded.  The path also widened in several places.  Did I mention that it was a rough stone path up the mountain, with some wide concrete paths as well along the way.  I took the hard way up, step by step ...