Visited my parents back in the little town of Ponteix, Saskatchewan in late February.  It was refreshing as I have not been home that often after having left shortly after high school graduation.
I looked through the old yearbook, took note of the changes my parents have made to their home such as getting rid of the wood stove and pool table.
Being back home was peaceful and filled me with memories for a time that cannot be re-lived. Oh if I only knew then what I know now, how I could have made a few changes to my plans.  I guess this is a part of what regret feels like.  If only I had known how insignificant and how little people cared about me and my dreams, perhaps I could have ....  If only I had been more realistic about my abilities and the things I tried to pursue.  I wonder how different things might have been if I had approached the professional photographer in Assiniboine for a job for instance.  I use to marvel at his big Hasselblad cameras when he came to do school photos and the fact that he was a sharp dresser who drove a Cadillac left an impression on me that was not easily forgotten.
Anyway, I digress, visiting my parents was also a time to introduce my new wife - a wonderful woman who makes living a worthwhile pursuit again.  It was also a time to make a few new images and process my first rolls of 120 film back in the downstairs bathroom - boy I haven't processed film there in decades and it was only 135 film at that time.
Visited a couple of my favourite spots at a lone stand of a few trees clinging onto life about 4 or 5 Km out of Aneroid.  I first took the shot back in the early 1980s with Kodacolour II film at that time.  There was short grass prairie broken with a well-worn cow trail leading towards Aneroid just beside the few trees.  Another favourite spot is in Aneroid at the abandoned school house.  As I work in this area I can't help but think about the guffaws of laughter and excitment that must have transversed the airwaves of this school years many, many years ago. 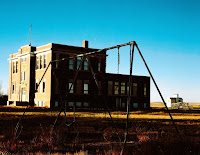 Another thing I like to do is monitor the area where I discovered a long-necked Plesiosaur in the early 1990s, but it was too wet to venture into that area this time.  The great disappointment about this fossil discovery, however, was that the sign on the highway intersection reads "millions of years" when in fact the creature only existed thousands of years ago.