Well, here we are 17 years into the new millennium and second decade of the 21st century.
I am blessed to greet this new year ... another year with my wonderful wife who rescued me from a pancake disaster.
It seems that a lot of things have happened and changed at or near this pivotal point.
For instance, at one time in the 20th century, innovations were much slower to come to the forefront. A new style of telephone or new flagship camera would last for several years unlike today's head-spinning introduction of newness of this, that, and the other thing happening several times in a single year!
The rise of a computer manufacturer to a mobile communication world leader and the rapid rise of digital photography which has devasted the film photography industry are just two examples. These last two points are of most interest here because as great as the benefits of digital photography may be, it has changed human behaviour in ways that are debatable. Today we can be anywhere in the world with a cell-phone camera, a mobile connection and share photos and video instantaneously with the whomsoever.
Nevertheless, there are still those who work with photographic film, process it and print upon silver-gelatin fibre papers in a real darkroom. There are still people who meet for coffee, lunch, and dinner, but now with the interference of mobile phones. Oh well, nothing stays the same.
I have made it a tradition now for the last several years, i.e., 2009, (actually I first came up with this annual event 2000 01 01), to get out on the first day of the new year to make my first images. This year I had eyed an apple tree in the neighbour's yard as seen from my kitchen window. Unfortunately, the day was windy and cold with a light covering of snow upon the grass and the sun struggling to break free of the clouds. I was working with my Mamiya 645 Pro TL and using Velvia & Acros films rated at ISO 100. I started with the straight 55mm Sekor lens, but changed over to my 55mm - 110mm Sekor zoom lens for the majority of the shoot.
The house appears abandoned and the trees neglected. The branches were drooping down to the ground heavy laden with yellow apples. Some were rotting on the tree, others were partially eaten by birds. I was out there with my camera set up on a tripod patiently waiting for breaks in the clouds to catch the sunlight on the drooped over apple tree and while waiting noticed a beautiful hummingbird with a bright red chest and a robin pecking out of an apple in an adjacent apple tree. In this instance despite the cold weather, I found observing while waiting to make photographs just as rewarding as coming home with a couple of rolls of film for processing.
Please stay tuned ... images to follow.
You see, the anticipation of waiting like waiting for Christmas is lost with digital. Why have we become so impatient?

Processed on the 05th here are the negative scans ... 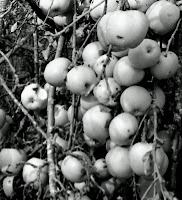