Well, for the 17th annual world pinhole photography day, which is the last Sunday of April I was in the midst of a move from Victoria, BC to Abbotsford, BC including ferry, about a three-hour journey.
Nevertheless, I still wanted to get some shots in for WPPD, which I haven't missed since 2008. It was just a year before when I became seriously interested in pinhole imaging and found out about WPPD. In high school I built a crude pinhole viewing camera with a shoe box and waxed paper as memory serves and then in around 1995, I built an actual pinhole camera out of the packaging for a Mamiya lens box and got one 35mm frame of an image showing science stuff in a school storage room, but alas, I digress ...
So, while loaded the vehicles, I also set up my ZeroImage 69 loaded with Shanghai GP3 ISO 100 film to make a few record shots to celebrate/participate in the day.
However, it wasn't until today (2018-May-14) that I got the chance to process the film. Unfortunately, it came out looking awfully fogged with faint images and the backing paper also was quite pronounced showing through the emulsion.
Anyway, here is one of the images I managed to pull off the roll, by scanning in transparency mode and then converting in PhotoShop Elements. 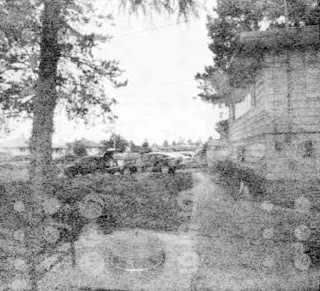