Skip to main content
August 17, 2018
Echoes along the Notukeu
Ponteix, Saskatchewan, CANADA, Archaeology & Paleontology
Caveat: This report is long overdue - I’m going back over 30 years to recall the details and have searched the Internet on a few occasions, to confirm or find specific details, which I do not readily have access to here in Abbotsford, BC. These are my memories and I have endeavoured to recount them as accurately as possible.

My acquaintance with Mr. Henri Liboiron of Ponteix, Saskatchewan (Rural Municipality of Auvergne, No. 76), began whilst I was a boy scout about 12 years old. Our troop had visited Mr. Liboiron’s farm, where he built to commemorate the 1980 Celebrate Saskatchewan Project, an archaeological museum in his basement. Since he was a farm boy, Henri had shown a keen interest in the cultural artefacts of the people who once occupied the prairie long before the settlers. Over the years, he had amassed one of the finest documented collections of aboriginal artefacts in the province, and perhaps country. So, it was in this context that our group was honoured to visit Mr. Liboiron’s museum.
Henri reminded me of that first meeting that went something like this …
I asked Mr. Liboiron if the arrow points were still sharp? [because of their antiquity, I wasn’t sure]. So, Henri scraped one across his hand which made a mark and kept on with his explanation about his recorded collection. “Mr. Liboiron, someone said, ‘your hand is bleeding’”. Henri told me, Bob that is the first and the last time I’ll bleed for you. I had my answer!
Fast forward a few years and our paths crossed again when I had the opportunity to print photographs of Henri’s pottery experiments. From then on, we became very good friends despite the decades that separated us in age. I accompanied Henri on archaeological site surveys in the Ponteix area. Henri was always about conservation and preservation in line with the Saskatchewan Heritage Property Act (1980), even before the act become law; and with sharing his knowledge in both French and English. He became a coveted speaker in schools. He was in contact with the provincial/university authorities and made his carefully documented work available to the Crown.
I don’t know why I wasn’t more active high school days, but in 1983 Henri along with Dr. David Meyer of the Saskatchewan Research Council (SRC) in Saskatoon (now a professor emeritus of Archaeology & Anthropology from the

University of Saskatchewan), and members of the Saskatchewan Archaeological Society (SAS), began the first professional archaeological excavation of an in situ Cody Complex site a few kilometres just east of Ponteix called NISKA (DkNu-3). Henri’s home on the hill just south of the junction at highway #13 and #628 into the Ponteix town site, became the basecamp. A few years later (1986), David and archaeology student Steve Salinger re-visited the site to gather more datable samples at which time I got involved. A few more units were excavated I think as follow-up for the initial excavations. The NISKA site remains (to the best of my knowledge) one of the oldest and rarest in situ Cody complex sites discovered.
However, before the first NISKA site excavations, my real introduction to archaeology came during my high school graduation week in June of 1984. At this time, a team of professional archaeologist from the Archaeological Resource Management Section (ARMS) had visited Ponteix to conduct excavations of the NAPAO site (DkNv-2), another early Paleoindian site Henri had recorded some years earlier. This site was about ten kilometres West of Ponteix near the hamlet of Cadillac, Saskatchewan, only a few kilometres off of #13 highway. Here I met archaeologists Gil Watson and Patricia Frose from Regina, Saskatchewan and avocational archaeologist/artist Muriel Carlson whom I would later meet in Saskatoon where we both were attended university. Muriel was a mature student with a lot of wise advice, unfortunately I was too young and stupid to adhere to much of it.
As I recollect, the excavating conditions at NAPAO were very hot and dry, [so sunblock and lots of drinking water in an ice cooler are good things to remember to bring] and between working with a trowel or drawing side stratigraphic profiles for Gil, I was preparing for grad.

From then on, Henri and I worked on several smaller projects. As we dug down with the trowel and did our own modest literature studies we wondered how people long ago did things, thus began our foray into ethnographic studies. Henri had reconstructed a tipi, built and tested an atlatl (throwing spear), made his own pottery with materials sourced from his farm land, and practiced flint knapping to recreate arrow/spear point manufacturing and we built a sweat lodge - scientific not religious.

Together one of our most popular projects was the making of pemmican. Our pemmican research turned into a conference paper for presentation at the Annual Meeting of the Saskatchewan Archaeological Society in Swift Current in 1988. As I gave our paper, it felt a bit awkward seeing some of my archaeology professors in the audience. At a later SAS conference, Henri presented his paper on some research he had done with pigments and paints upon local rocks around his farm. With Henri’s help, I also published a paper in the 1993 issue (Vol. 14) of the Saskatchewan Archaeological Journal on the Pichè Pot from Ponteix. 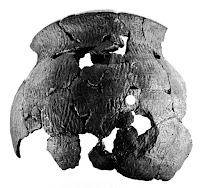 I moved away from Ponteix in the late summer of 1984, but enjoyed returning home at every opportunity and headed straight for Henri’s. I remember sitting for the longest time in the local cafes discussing heritage, history, archaeology, paleontology, genealogy and/or examining small artifacts at the table or a paper or good book on any of these topics. We spent time in his survey the land in his truck checking on the areas around Ponteix for any blown-out areas of prairie when artefacts may have surfaced or working on our ethnographic projects. It was a great time.

One of the things I love to do when visiting home is hike in a hilly, rocky, alkali infested area locally known as the Tillet Hills about eight kilometres NE of Ponteix at co-ordinates: SW 33-09-11-W3; N 49°46.418’ W 107°26.365’ (data from GPS 12 Garmin, 1999). In early 1992, while on a visit just before leaving to take an English teaching assignment in Nishinomiya, Japan, I found myself walking in the hills which are filled with mica, clay balls, and lots of baculite fossils, but then I happened to notice something different about a piece I found, I picked it up and it looked like a very well preserved animal bone. I took it to Henri, we returned to the site the next day and he pointed out to me that the bone most likely came from the tall cut-bank just in front of the Notukeu creek. Sure enough, we found something protruding out of the cut-bank, dug it out at which point Henri carefully packaged up what we had found and sent it off to the Royal Saskatchewan Museum (RSM) in Regina. 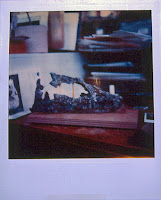 By this time, I had embarked on my overseas adventure and later in the mail received a Polaroid picture of a partially completed skull of a long-neck Plesiosaur - WoW! The following year Tim Tokaryk from the museum in Regina came out to conduct a formal excavation of the plesiosaur and Ponteix enjoyed its ephemeral “15 minutes of fame”. It is also important to recognise the land owners C. Picray and P. Perrault. I could only rely upon Henri’s progress reports by letter mail and photos taken by others. I initiated one of the most significant finds in Ponteix, and I couldn’t even be there to take part in the fossil recovery.


In 2003, Tamaki Sato (then University of Calgary), wrote a paper on the Ponteix Plesiosaur nicknamed, “MO”. Her paper gave Mo a formal title: Terminonatator ponteixensis
The RSM designation is: (RSM P2414.1). The in-situ data is labelled the Bearpaw Formation. A study of the fossilised bones suggests a young adult about seven metres long. According to Wikipædia, Mo was found in the, “ Campanian-age Bearpaw Formation.  Terminonatator is currently one of the youngest plesiosaurs from the Western Interior Seaway.” L. Pichè from Ponteix built a model replica of Mo which sits at the top of the highway junction leading into Ponteix. There is also an official plaque beside the model crediting me with the initial discovery. However, the date for the marine reptile is way off base, instead it should recognise the actual observable global events and place the fossils at the Tillet Hills c. 4500 B.C.
I returned to Canada in the summer of 1996 to complete a degree in education.
Early that year, another great event took place when the Saskatchewan Archaeological Society held its annual meeting in Ponteix. Now Henri had the movers and shakers in archaeology right at his doorstep where he could show off the recently completed French cultural centre and new Notukeu Heritage Museum (1994) at the bottom of main street. It must have been a wonderful thing to have all these people visit him and the fairly new museum in Ponteix.
I was again looking forward to spending time in the Ponteix region when I could be out combing the fields and Tillet Hills with Henri, but in September of that year Henri passed away from cancer. It was one of the hardest things I had to deal with. At the young age of 67, he was gone. Here I had just returned to Canada and only a few hours away, and he was gone. His death is still very troubling to me, but we must keep moving on and I hope to meet again in Heaven someday.
In 1999, I took out my own paleontological research permit (in the past, Henri always took care of this stuff), to conduct research on a new fossil I found at Tillet Hills. After writing up the report including photos the RSM suggested the vertebrae I found within a mud-rock matrix might be a mosasaur. The thing that intrigued me the most was that the bone structures were clearly visible as if the bone had only recently been fossilised. Because the vertebrae were also

symmetrically lined up suggests rapid deposition, i.e. a global catastrophic event.
Well, after that I moved on and only get to Ponteix rarely. When I do, I don’t survey a lot of the sites including NAPAO or NISKA, but at least I still visit the fossil bearing hills where we made our great discover, always looking for a sign of Henri’s presence like the butt of his Rothman’s or a piece of plaster.


Something seems to always change when I’m back home like this last time in August 2018, Henri’s hard work and lithic display has been totally destroyed and classified into little glass cases. Much of the museum of archaeology/paleontology is now taken over by a bunch of stuffed animals; don’t get me wrong, they are beautiful and well preserved, but they don’t belong in this setting if we are to take the Notukeu Heritage Museum of ARCHAEOLOGY/PALEONTOLOGY seriously! Much of what Henri contributed to the sciences has been pushed aside into a small corner of the museum, with the tools of the trade nowhere in sight. Well I’m not around much, and am sometimes surprised at what people will do, but I suppose at least the collection is still there and on display in some form. Henri is the kind of guy who welcomes progress and the getting of knowledge. We lost an incredible asset to the natural history of Saskatchewan and I lost a great friend and mentor. I still miss him very much.
Bob St. Cyr
August 2018