This year marks the 25th anniversary of my initial discovery of a long-necked plesiosaur in SW Saskatchewan.
It was shortly before embarking on my first overseas teaching appointment.
Bad timing, because I missed the whole excavation and associated events surrounding this really big deal for a small Saskatchewan town. Boy, I wish I had made the discovery 10 years earlier whilst still a high school student.
Anyway, my dear friend Henri Liboiron graciously kept me abreast of the happenings through his hand-written letters. I recently came across them and decided to type them out and I would like to share them with you here, with some slight editing.

This photo of us was taken at the site sometime after the excavation as were the other photos in this blog post. 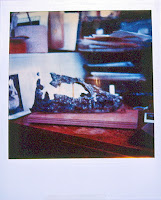 Handwritten reports by Henri Liboiron to me whilst I was overseas in Japan. I have made some slight editing changes, i.e., punctuation, spelling and committed these reports to a computer document Nov. 2018, just over 25 years since the excavation - sorry I missed it - what a time to make a significant find.

Dear Bob:
Tim Tokaryk arrived at 3 o' clock this P.M. to begin the excavation of the plesiosaur. I helped him find a good camp spot immediately west across the river. Saturday six students from Saskatoon and Regina will join him. He hopes the pelvic girdle is not in a concretion but is very optimistic.
Tomorrow morning at 9 A.M. Paul Perreault will remove the overburden to a depth of 8 ft. [2.4 m]. Visitors will be allowed at the site; so, I put indicator signs on the east road. The CBC and the Leader-Post all want in on the excavation. I also put up signs in the 3 restaurants and the Town billboard.
Tim Tokaryk says it’s a great discovery, which you, half way around the world can fully appreciate.
I will take slides and photos of the procedures and will keep you posted by letter.
Best regard [ ] and I remain,

Dear Bob,
Here is a progress report on the Plesiosaur Site.
Paul Perreault removed 8ft. [2.4m] of overburden
It took us a whole day to find the bone layer
It was 2ft [61cm] below the surface but 2 bones were found 4ft [1.2m] below that.
Today Tim Tokaryk exposed 8ft [2.4m] of neck bone in a straight line
including the bone affixed to the head (very impressive)
The main body seems to be compacted together but is in excellent condition
He will let the neck bone dry in the sun for one day, then coat them with a
special varnish. Then encase the whole thing in one big plaster cast.
I excavated the tail end of the Plesiosaur but so far no cervices(?)
So far, I have taken 21 slides of the whole process.
Tim is camped just West of the Notukeu Creek with an easy access to the
site. I have placed two planks across the Creek.
Just made 2 signs for Tim which say to the visitors 'Please do not touch the fossil.
Tim came to the house practically every day to shower. He camps at the site.

Tomorrow my brother-in-law and I are pouring concrete for granary
pillars, so I may go to the site late in the afternoon.
At the rate of progress, Tim might finish the job in 8 to 10 days but that is
only an estimate
One of these days I will go Saskatoon berry picking as they are plentiful
Yesterday only one university student showed up at the site, but Larry
Piché, a young Carignan boy, my sister [Collette], brother-in-law [Victor]
and Angele gave Tim some help.
The shale is very sticky & grainy, but today was a perfect day for an excavation.
Until the next instalment
I remain

1) Yesterday Tim excavated the right front flipper (Facing your model) it is
complete and very well preserved.
2) The left flipper is 95 per cent complete including the bone excavated and
those I recovered from the hill.
3) The neck is in a straight line; is complete and will be placed in a plaster cast
and taken to the Museum of Natural History [Royal Saskatchewan
Museum] in Regina for restoration.
4) Tim says they have already started restoration work on the skull at the
SMH [Saskatchewan Museum of History]?
5) Your mom came to the site today and took photos which she will send to you.
6) I worked all day at the site. My niece Angele has been working there for the
last 3 days.
7) We have had visitors continuously every day. I try to speak to most of
them so that Tim can be free to do his work. (He is a fine palaeontologist to
work for). Other people also give a hand but he has no crew - as he had hoped.
8) We have reached the centre of the body, but Tim thinks that the rear
flippers & tail may no longer be there (probably destroyed by the cave-in of
1982). Further testing will determine if that is so*.
9) I was interviewed on French Television and Radio. Also on the CBC English
Network. So was Tim. By this Friday the Leader-Post reporter should be here.


* in a 2018 visit to the museum, it looks like the tail section is intact, in good condition in a glass box stored at the Notukeu Heritage Museum in Ponteix, Saskatchewan, CANADA.

10) My biggest problem is that I can't go home as the phone is always ringing. Tonite
[sic] as a diversion I went to pick Saskatoon berries.
11) I had made road direction signs on the East side of the site. However, we the crew
are camped on the Westside. Tim stays at the site.
12) I have made 2 signs for the site proper which read, "Please do not touch the
fossils."
13) At this moment, it is raining cats and dogs. Tim covered the fossil with a plastic.
Anyone going to the site tomorrow will not be able to come out.
14) I still have one taken of my slide film which I will use to film the neck plaster
cast.
15) The next report will now take at least 3 days as there is no way we will
finish this year.
End of progress report

1) Work is progressing very well. Yesterday Tim uncovered the left shoulder blade
and the left front paddle which I am sure is complete, so far, the skeleton is complete. As for the tail, it remains to be recovered. The two-right paddles are the bones I recovered all over the slope.
2) This morning Tim placed the first coat of plaster on the neck vertebrae then left
for Regina & will return tomorrow.
3) Some of the major bones from the main body are covered with a thick coating of
iron oxide and will eventually be placed also in a cast.
5) Last week over 400 people visited the site.
6) Media roll call: CBC French & English TV & radio. The Western Producer &
Leader-Post, Swift 2 local radio, The Booster from Swift Current and finally
tomorrow at 11:00 the Leader-Post reporter will be here.

7) The Royal Tyrell Museum of Paleontology is already inquiring in purchasing the
first mould reproduction. They only have the short neck plesiosaurs.
8) Work on the head is progressing well at the Museum of Natural History.
9) Tim thinks it will take 2 years to prepare the bones.
10) At 5 o clock, I will relieve at the site so that Marc Carignan can go and shower &
partake of a good hot meal.
11) Particular excavation methods at the site are quite different from archaeological
procedures (too different to explain in a letter)
12) The Ponteix Plesiosaur so far is the best specimen in all of western Canada &
possibly all of Canada.
13) Father Joe used the Plesiosaur to make a point in his sermon today.
14) Another 7 to 10 days should wind up the excavation. Paul Perrault has offered
to bring the plaster casts up the hill. It will be the crucial moment of the removal of the fossils.
15) The casting procedures are too complex to explain in a letter.
16) Best regards to both of you.
17) Sweatshirts of the Ponteix Plesiosaur will soon be on sale, the profits to go to the
establishment of the Museum.

Dear Bob:
1) Enclosed is the interview of Tim Tokaryk by the Booster.
2) Leader-Post interview should be published Fri or Saturday.
3) Yesterday we only worked about 3 hrs because of shower
4) Today Tim removed all loose bone around the body.
5) Most of the back vertebrae & hips are in an iron oxide concretion & will be in one
big cast including ribs etc.
6) By tomorrow night, all there will be to see for visitors is a neck cast of 8ft (2.4m)
& the body cast of 8x4ft (2.4m X 1.2m)
7) The total length of neck 14ft (4.2m) approx. head 1 (45cm).
Total length 30-32ft (9m - 9.7m)
8) Most bones outside the concretion are in good shape
9) Neck vertebrae are 8ft (2.4m) in one piece & others separate.
10) Today I cut a whole roll of burlap in pieces 14x8in (35.5x 20.3cm) for the
plaster cast which will consist of eight layers of burlap & a wood frame then we
will dig 3ft (91cm) below the bones then flip it over; remove the excess soil &
plaster cast the other side
11) Today I worked at the site from 1-9:30 P.M.
12) Since July 8th we have had over 700 visitors
13) Tim Tokaryk will give me a complete set of prints. I sent for my slides to
Toronto on Monday, since then I am taking photo shots, the last shots will be of
the cast & its transportation to the top of the hill etc.
over

14) I believe that the article in the booster gives justice to your involvement in the
project. The reporter took it for granted that Bob really meant Robert (an
oversight)
15) I'm just about pooped out & feel like a parrot with all the visitors (Polly wants a
cracker syndrome.
16) The plaster casts & removal should take at least four more days.
17) Tonite I removed the signs in the restaurant etc. Tomorrow I remove the "Don't
touch the fossils" signs & the highway signs as it would be better not to have too many people around when Paul Perrault moves the casts. But there will be people of course.
18) So tonite I lay me down to sleep.
And pray the Lord my soul to keep.
Should I dream of plesiosaur
Please let it be a long-necked Plesiosaur.
Best regards to you
Yours in Paleontology
for a change

6th and last report on the Plesiosaur Site

Dear Bob:
1) We finished our work at the site today, Tim went back to Regina with some of the
fossils at 2:30 P.M.
2) The neck cast 10ft (3m) long is beautiful. The large cast of the body didn't make
it, so we ended up with 3 concretions. One for the hips and two for the breastplates plus an assortment of fossils of 40 gastroliths (stomach stones). They may even have served as ballast for diving. One was so large we wondered how he could have swallowed it.
4) Tim will return next Wednesday for the neck and the 3 concretions which are
now stored on Paul Perrault's farm.
5) Roger Piché will prepare Ponteix Plesiosaur T-shirts
6) We have had over 700 visitors to the site
7) It has been three weeks today since we started work at the Plesiosaur Site
8) Enclosed is the report in the Tribune. In one of the photos, you will see red tape
surrounding the work area.
9) Must close for now for I am expecting visitors.