Aerochrome at the Fish Hatchery

On Tuesday (13 Aug. 2019), I anxiously and slowly in some places, made my way from Abbotsford to the Capilano Fish Hatchery & Park to meet a fellow Darkroom group member for a little photo outing.
Unfortunately, I was about 20+ minutes late due to traffic problems I could not foresee. 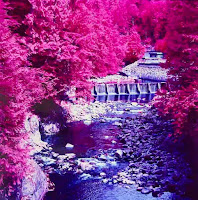 Anyway, the outing was very nice, beautiful forested area with a modest river running through it and a fish hatchery attached.  Here are a couple of the images from the roll of Aerochrome I processed today. 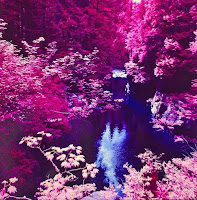 I was working with my Mamiya C330 Pro S with a yellow filter over the taking lens and really like it for infrared photography whether I am using black & white or colour.  I felt privileged to be working with this very rare breed of film, i.e.,  Aerochrome - colour infrared colour slide film.  Now this film was originally developed for the United States military and also found applications in forestry work.  But more importantly, us fine-art photographers found an artistic use for the film.  Because Kodak stopped making the film back in 2011 it has become difficult to procure at reasonable prices.  It's a very specialised market with only one supplier that I am aware of so you know what that means as far as the price per roll goes. 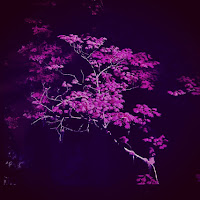 Here is one of my favourite images from the photo session, a beautiful Momiji tree growing near the water.  I spent a fair amount of time studying the angles and the light before finally depressing the shutter. 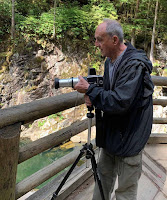 It was also nice to be working with someone who wasn't in a rush because photography, of course, can be about getting the great images, but it is also about the fellowship with other photographers and their take on photography and the present scenes before you as well as the smells and sounds of nature.  Some of the best photos I made that day were of Larry in action with his Linhof and Hasselblad cameras, he is a good model.