Yesterday morning I headed out to Mike Creek Falls in Golden Ears Provincial Park just north of Maple Ridge, British Columbia, Canada.  The trailhead to the falls is just inside the park and from there it is a pleasant ~25 minute hike to the falls.  The drive from here in Abbotsford takes about 40 minutes on the BC #7 highway.
Well although still cloudy after on and off rainfall, I felt it was time to try out the new bellows that Kel had installed for me on my Toyo 45 AII.  After processing several sheets of film over several months of shooting, I noticed that some of them had a diagonal fog line running through them.  This is extremely frustrating as sheet film is expensive and some of the shots are pretty important to me.  I looked into the camera to check the bellows and sure enough light leaks.  Speed ahead a few weeks to yesterday (26 Dec/19) with the new bellows installed, I shot and processed the film only to notice several sheets ruined by the diagonal fog line again!  It wasn't every sheet, so I'm more puzzled now than before.  Perhaps it is the film back,  perhaps it is the way I'm loading film holders into the camera, not sure but hopefully, I can resolve this before too long.
Anyway, here is a sample of one of the good sheets. 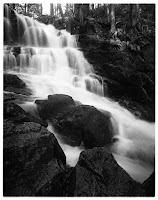 I was also working with 35mm ILFORD HP5+ and Kentmere 100 films which came out splendid - the Canon AE-1 Program is a really great camera to work with.