An acquaintance from the f/295 forum sent me a couple of rolls of 120 Kodak E6 film to test. He was having some questionable processing results, so I was going to expose a few rolls and have them processed to see what the results would be like.
It was amazing the things that happened unexpectedly,i.e.,the people I talked to.
I met a gallery owner, a shoe cobbler, and a passerby who was quite interested in what I was doing. I even helped a Chinese girl find her way to a government office.
I found some interesting images down in Chinatown - especially some colourful pinwheels in a wicker-type backet in front of a shop. 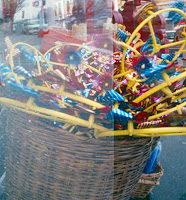 Well, it wasn't until I processed my B & W film from the same outing (Mon.) that I realised my mistake. I was photographing with my ZeroImage 6x9 multiformat camera. I was advancing the film for the 645 setting when the interior slates were set for 6x9. Both rolls were overlapped, but as it turned out, it made for unique images.
Thursday 21/02/08 - revisited several of the places from Monday's outing to rephotograph this time with the 645 format set in the camera - dropped the chrome off for processing and await to see the results.