2018 July 14th was my second opportunity to process colour slide film with the darkroom group here in Abbotsford, British Columbia, CANADA.
We did seven rolls of 120 and four did not turn out as the film overlapped whilst loading. The Jobo reels are supposed to be able to take two rolls of film, but for some reason the first two reels I loaded overlapped, whilst the last reel was okay. Not sure what to think, but we've decided that from now on, we'll only be loading one roll of film per reel. The final and seventh film was loaded onto a much easier to use Patterson reel but loaded into the Jobo tank - it turned out fine as well. It should also be noted that we used expired chemistry and I think my film was also expired, not sure about the others. 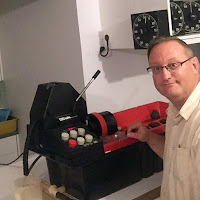 I've noticed that film comes out of the final rinse with a milky look to it, which dissipates during the dry down process. Oh well, lessons learned all the time. I am however looking forward to viewing the films that did turn out.