On the 8th of August 2019, I received two things from the post:  1) two rolls of 120 Aerochrome film and 2) my long-awaited Lab-Box.  I put the film in the freezer straight-away and then proceeded to figure out the Lab Box to process a roll of ILFORD Delta 400 120 format film.  Now daylight film processors are not new, I think the German's made a 135 and 120 version out of Bakelite back in the day; this new one is made with a lighter plastic.  With the Lab-Box I had ordered both the 135 and the 120 modules.  The only thing missing was the professional lid, which offers temperature readings of the chemistry - not a big deal as they did send a regular lid, but it was a stretch goal that had been achieved and thus, I think all of us backers were/are expecting it.

Anyway, got the pieces put together and the procedure figured out in about an hour or less.  However, the film loaded onto the reel so seamlessly, quickly, and quietly that I thought I had a misload but when I opened the lid noticed the film had loaded just fine ... oops.  Anyway, went ahead with the processing and the film came out fine [500ml of Kodak HC-110(b) @ 7 1/2 minutes @ 20ºC] save for the fogging 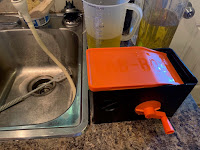 from opening the lid.  The best image on the roll was from a few weeks ago when I was at Cliff Falls - a disappointing place if you are a photographer hoping for a good angle to shot the falls from - one has to be satisfied with high over the river bridges - I wasn't impressed although it is a nice hiking area.  Here is the image from my first Lab-Box processing experience.